We’re humbled and honored to announce that Jason has been elected national board president of Association of Music Producers (AMP). We believe our industry evolves through both cooperation and vibrant debate, and AMP provides that platform. Raise a glass to Mr. President!

“It’s an honor to be able to represent my colleagues, peers and friends as president of the Association of Music Producers,” said Menkes. “It’s an exciting time to take the reins, as our industry is in a constant state of adaptation and reinvention.

It’s been a long standing COPILOT tradition to end the year by sharing some of the music that’s inspired us the most. And without fail, we hear from you and we all go back to where we began with music, a bunch of fans trading opinions and new discoveries.

END_OF_DOCUMENT_TOKEN_TO_BE_REPLACED

COPILOT managed the audio side of creative production to develop each character’s unique sounds.  A sample library of character expressions and moods was then built so that the creative team at Anamoly can quickly craft customized social media content on a daily basis. See some of our work below the fold:

END_OF_DOCUMENT_TOKEN_TO_BE_REPLACED

Our friend Jessica Taylor recently left Google to launch her own app, called Rolltape. NY Magazine says it is disrupting conversation and TechCrunch describes Rolltape as a “voice messaging app for sharing personal moments with friends.” As audio and music nerds, we enthusiastically describe it as a way to bring your voice, ears, stories and heart back to your communication.

Knowing how sophisticated and plugged-in our community is, we expect lots of you to grab the free app over at iTunes and try it out! Oh, and of course we should mention that we were excited to create the music for the welcome video below and intro tape included in the app. It’s great to be part of innovation.

END_OF_DOCUMENT_TOKEN_TO_BE_REPLACED

Our expansive set of arrangements for Visa’s Fifa World Cup experience, the “The Samba of the World”  was recently shortlisted at the 2015 Cannes Lion Awards and named as finalist at the London International Awards, in the song arrangement category. We are also thrilled that our work in collaboration with AKQA, Skunk and our musical partners around the world was recognized in the Cyber/Web Campaign category  at Cannes. Words don’t fully describe the experience, so watch all the films here.

END_OF_DOCUMENT_TOKEN_TO_BE_REPLACED

COPILOT loved collaborating with Rokkan and Ghost Robot on the Humane Society‘s campaign for “Same Day Pups: Puppy Drone Delivery.” A classic song from 1904 was revived and repurposed, with a fresh feel and bright new sound. It was an honor to work on this project and help raise awareness for an “Upworthy” cause. Music is truly at its best when it can be used to help others. Also, be sure to check out this viral video in Ad Age!

END_OF_DOCUMENT_TOKEN_TO_BE_REPLACED 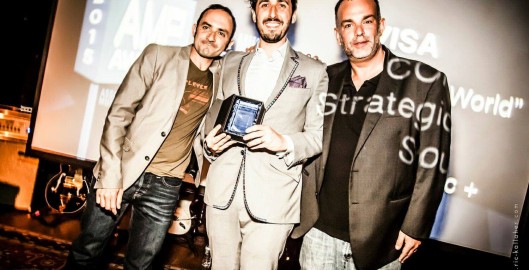 COPILOT is humbled and honored to have won ‘Most Effective Use of Music in a Non-Broadcast Medium’ at the AMP Awards! A huge thank you to our amazing international team of composers for making “Samba of the World” so incredible, unique and memorable. We also want to congratulate all the other nominees and winners! Check out the winning project here: END_OF_DOCUMENT_TOKEN_TO_BE_REPLACED

COPILOT Shortlisted for the 2015 AICP Next Awards

We are incredibly thrilled and honored to be shortlisted for the 2015 AICP Next Awards. Our collaboration with AKQA, Skunk and Visa for the integrated campaign ‘Samba of the World’ is being considered for this prestigious award. Visa asked COPILOT to collaborate with musicians from each of the 32 qualified countries to reimagine the Brazilian favorite “Maria Caipirinha Samba da Bahia”. Then they asked 32 filmmakers to share how their nation celebrates the FIFA World Cup. The AICP Next Awards will be on June 2nd at the NYU Skirball Center.

END_OF_DOCUMENT_TOKEN_TO_BE_REPLACED

Buckle up, it’s going to be a high climb to the top! Eight different gears, eight different artists and COPILOT at the heart of it all. We loved teaming up with Acura and Razorfish on this unique project that included amazing emerging bands, DJs and producers. Artists were assigned a different gear function which inspired them to create innovative and exciting tracks.  With the different speeds given to each act, we had the privilege of seeing these projects accelerate from the ground up.

END_OF_DOCUMENT_TOKEN_TO_BE_REPLACED

COPILOT loved partnering with Leo Burnett and Jell-O to revive their classic jingle. This fun, friendly and flavorful spot features a throwback tag that is sure to have you singing along. Check out our recent collaboration with this classically delicious brand.

Also be sure to check out this article from Ad Age about the spot!